Dirty Energy (what have we learned from Fukushima nuclear accident?)

below is my presentation for a security conference Codegate 2008 in Korea. I was an invited speaker. 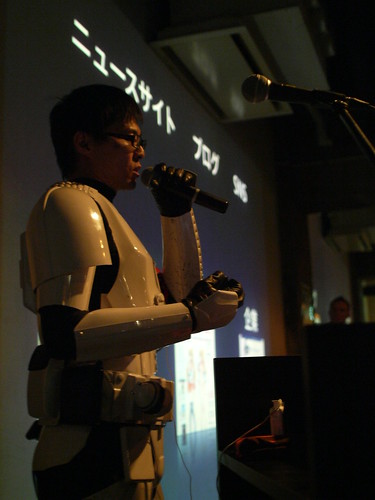 CGM stands for Consumer Generated Media and in Japan the word CGM is much popular than the word UGM (User Generated Media) which common in the USA someway. The event attract bloggers, YouTubers, CGM service providers and just regular IT professionals in Tokyo, in the majority of who are mostly bi-lingual or foreigners. The event has been growing rapidly since Feb 2009 and the number of the attendee list reached to nearly 400 people, even while CGM Night is a private event that requires invitation or at least escorted with a previous attendee.

The mottoes of CGM Night are "No Smoking, No Nakedness, and Free from Portrait Rights Restriction". Thus attendees of the event can take as many pictures as they want and to be encouraged to upload it to own blog, Flickr, YouTube, or any other User Generated Media services as they like. Then Danny would generously post links on dannychoo.com site.

This is a very good example of Reputation Sharing Economy at work. Reputation is something that reside in people's mind but can be measured with technical aspects. Some of measurement markers are of course Page Views and Unique Users. www.dannychoo.com actually gets 20 Million page views and 2 Million Unique Users a month, as the site claims. The bloggers, photographers, or YouTubers who participated and made content about CGM Night would get some amount of traffic from links on www.dannychoo.com.

However, how to keep the traffic largely depends on quality, timeliness and point of view of the content made by participants. But there is a chance that good ones can grow their reputation with good content. And once they grew, they can start similar way as Danny is doing: to give someone a part of their reputation. Unlike money, reputation won't reduce by act of giving it. Instead, it is going to multiply.

To make these Reputation Sharing Economy grow, one foreseeable problem is Copyright issues. But this will be solved with Creative Commons license scheme. For example, when a photographer upload his/her photos of CGM Nignt to Flickr, they can choose Creative Commons license from the menu, possibly with CC-BY (means Attribution). So, someone who saw his/her photos of CGM Night and wanted to use it could easily do that just displaying the photographers name along with the photos. Thus, Creative Commons is an enabler for CGM/UGM into Reputation Sharing Economy.

Here's a bit of addition to clarify more. The reason why Copyright would become a issue with Reputation Sharing Economy in CGM/UGM is that the handling of copyright clearance and its volume. Current Copyright law in most of countries automatically set the creator of the Creative Work (texts, graphics, movies or other form of expressions) as the Copyright Owner, even without his/her knowledge. Thus, someone who may want to use such Creative Works has to contact the Copyright Owner for permission to use, if the person lawfully use the Work.

This clearance process was fairly simple in the old media publising realm because there were publishers and representative agents to handle the process in between. But in the CGM/UGM realm this process becomes growingly complex, especially in the situation for a content creator become famous. Such content creator is Copyright Owner who could get 10s of thousands of copyright permission requests from ordinary people who just want to use his/her Creative Works in CGM/UGM domain. We can imagine that to answer every single request could overwhelm the Copyright Owner.

BBC has a series of documentary called "Seven Ages of Rock" It is an overview of rock music scene from 1963 to 2007. Watching this program probably makes you analytical and I suddenly had a view of the formula of hit songs.

#1 comfort of similarity to ordinary life
#2 represented realization of inner desire
#3 sympathy for your existence and inner feeling of isolation, alienation, and frustration in life

When life filled with uncertainity #2 looks attractive. This can be broken down to...
#2A miraculous glamorous life
#2B destructive thug life

Here are some examples (sorry about old references) :
#1: John Denver, Bananarama
#2A: Motley Crue
#2B: many gangsta raps
#3: Metallica, Nirvarna

Now I am wondering same formula can be used to make hit content in other type of media....

Demand and Supply, Desire and Satisfaction

I've been digging my thought about Demand and Supply. Usually it is explained with only numbers. However, I wanted to know what makes it from the underneath.

Desire is in the core of Demand. then Supply should deliver Satisfaction. If not it fails. But there seems to be so many products or services forget it. I see there is a thought pattern issue: when a Supplier sells something, they often just provide stuff they have because that's what they have.. But what missing here is the Supplier might be ignoring the stuff is really demanded or not. And to understand Demand, they need to figure out what Desire is lying underneath.

@bopuc pointed out about identification and measurement of Desire is key. I agree. Demand side seek Supply following their Desire, then we can find markers to identify it.

Oops, it's been for 4 years from my last post, but it should be good to come back writing a bit. I've been busy then gone into deep bunker mode to find out what would be a new direction rather than sticking to security. the result was as forming an idea to start new web media on connecting fashion in Japan and social web in the international level. I've been putting the idea step by step with a few start overs, and now in the search of seed funding.

This press conference was held during BlackHat USA2005 on Jul 28 with Michael Lynn and Jeff Moss attended. All parties which involved were invited but Cisco and ISS didn't participate.

Here are pictures and MP3s from the Atocha Workshop.

Mar 10 of The International Summit on Democracy, Terrorism and Security

offcial site for the session Mar 9 of The International Summit on Democracy, Terrorism and Security